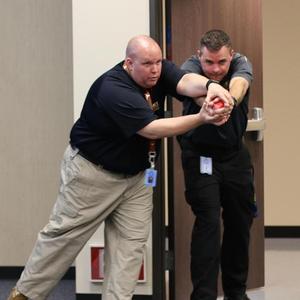 Learn what HUSD is doing to create a safe learning environment for students and staff.

Hemet Unified School District will continue to increase its security presence during the 2019-20 school year with several new initiatives. This past school year, the district transitioned from a supervision model to a security model and added several physical security improvements to provide a better learning environment for students and staff.

This year, camera feeds at school sites have increased from 262 to 1215, which is a 363% increase. This increase has allowed all 28 schools within the district to have cameras operating on a centralized Video Management System. Since the camera installation, after-hours property crimes at HUSD schools have decreased by 38%. In addition to protecting our sites, the camera recordings have been used to solve several property crimes in the community that occurred near or at our facilities.

The addition of the various security measures and positions is only a part of HUSD’s initiatives to create a safer environment for students and staff. Training is a large component in creating safe learning environments, which is why every employee in the district is required to take the ALICE e-learning training. ALICE (Alert, Lockdown, Inform, Counter, Evacuate) is a safety protocol program that HUSD started using to provide employees with information and ideas on how they can respond in an active shooter or violent intruder incident. The Security Department has presented ALICE training to various school and district staff. It is their goal to continue to train more employees during the upcoming school year.

Starting July 1, 2019, staff launched the use of the District’s Transportation Security Communication Center (TSCC). The TSCC is a centralized command center that will be used to manage the District’s extensive Transportation System during the day and will be the central point of contact for security at night. The centralization of security will allow personnel to immediately dispatch security officers to a particular site. The dispatcher can verify if a crime is actually occurring in real-time by utilizing the camera feeds and dispatch police to respond. The dispatcher will also be able to communicate with the offender via the school’s PA system in an attempt to deter a crime before it has been committed. The goal is to reduce the response time to actual crimes in progress.

The District’s Security Department is looking to continue its expansion to other security protocols to further support our students’ educational journey. For the 2019-20 school year, HUSD is expanding its use of metal detectors, narcotic detection K9s, and wireless locks.

HUSD has a lot to look forward to this coming school year with the implementation of additional security protocols. Security staff will continue to evaluate its current safety measures and adjust or expand to further support the safety of our students and staff.